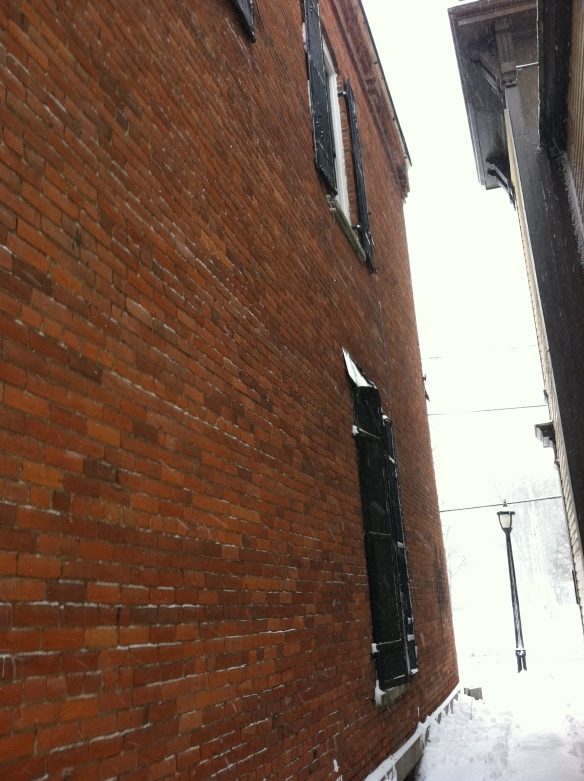 I don’t know if the photo gives you a real sense of it, but that second floor window is about thirty feet up.  I climbed through it earlier today.  In the middle of a snow storm. From the outside.

I had locked myself out of Stairway Healing Arts Center while I was shoveling the steps and sidewalk.  When I sought help next door at the fabulous Battenkill Books, Connie (proprietor extraordinaire) had the idea of climbing through a window, since I didn’t have a spare set of keys stashed any where.  She even had an assortment of ladders to choose from.  Alas, they were all too short.  Fortunately, my brother-in-law lives near by.  Marty is a terrific human being  AND a terrific contractor with all the tools and gadgets that go along with that.  i.e. He had an extension ladder and was actually happy to travel to my office with it and help me out.  He’s accustomed to my distress calls and always shows up to save the day with a smile.  Today was no exception.  We set the ladder up in the alley and he offered to make the climb, but I was worried about my ability to hold the ladder still for him.  So up I went, fear of heights and all.  I pried the window open, hoisted myself over the ledge, and landed in a pile of snow on the Meditation Room floor.  Problem solved.

I’m going to be a cat burglar in my next life.

2 thoughts on “Getting By with a Little Help”